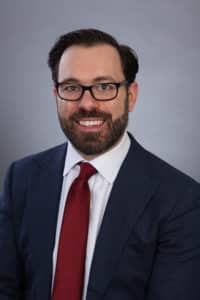 Brian Valerio is a NYC and New Jersey Criminal Defense Lawyer at Greco Neyland, PC. Brian has devoted his career to seeking justice. As a former Bronx Prosecutor in one of the largest and busiest New York City prosecutor’s offices in the nation, Brian learned how to aggressively advocate for his clients.

Brian has years of trial experience and is well-equipped to try his client’s cases when necessary. He has received favorable verdicts in numerous cases and has tried cases before judges and juries. Brian’s willingness to fight to the end for his clients permits him to receive the best possible outcome for his clients.

Prior to his legal career, Brian received a bachelor’s degree in Government with a concentration in International Relations from Wesleyan University in Middletown, Connecticut. Following his graduation from Wesleyan Brian worked in Sports and Entertainment for some of the most successful organizations in the industry. He later earned his law degree from American University Washington College of Law in Washington, D.C. Thereafter, Brian joined the Bronx County District Attorney’s office where he tried both misdemeanor and felony cases.

Brian is admitted to practice law before the state and federal courts of both New York and New Jersey and is committed to putting his broad range of skills to work on behalf of his clients. You can contact him online or call us directly at (212) 951-1300.