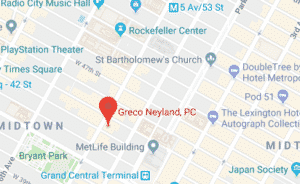 Grand Larceny in NYC is a serious offense, and even first-time theft offenders can receive a jail sentence as criminal punishment. By default theft, referred to as larceny in New York law is a misdemeanor offense called petit larceny. However, the theft of certain property is considered more egregious and is, therefore, charged as a felony. These heightened theft charges are called grand larceny.

The elements of grand larceny are:

If you take, withhold, or control the property of another person without the consent of the owner, then it is considered wrongful or unlawful. In New York, the value of stolen property is determined according to New York Penal Law section 155.20, which states that value is as of the time and place of the theft. If this exact value cannot be ascertained, then the value is the cost of replacing the stolen property.

The element of intent is also imperative to a grand larceny conviction. The defendant must have had the requisite intent, at the time the larceny was committed. Refuting intent is a common approach taken by an NYC grand theft lawyer, such as those at Greco Neyland.

Felony convictions in New York City have immediate and irreparable ramifications, and facing felony charges of larceny are no different. If you’re facing charges of grand theft, it’s in your best interest to engage an NYC grand theft lawyer.

Greco Neyland, PC has convenient offices in Midtown Manhattan, White Plains and New Jersey to serve clients in all five boroughs of NYC and the greater Tri-State area. To schedule a free initial consultation regarding grand larceny charges, call us at (212) 951-1300.