While browsing shirts in the mall, stealing one or two might seem a minor offense, but shoplifting is taken seriously in New York. Shoplifting is an issue in all five boroughs of New York City, and the state’s strict theft laws are applied vigorously to combat the problem. Often, this means combating charges of shoplifting is tough on defendants. Greco Neyland, PC can help. 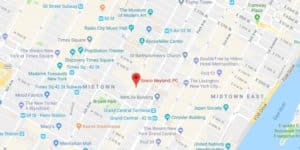 Even shoplifting a $5 notepad can result in misdemeanor charges in New York, but typically shoplifting goods valued less than $500 is treated as a violation, not a criminal offense. In these cases, the applicable statute under state law is Disorderly Conduct found at section 240.20 of the New York Penal Code.

For repeat offenders or theft of property near or above $500, the prosecutor will charge you with a criminal offense. New York doesn’t have a statute specifically called “shoplifting.” Instead, serious shoplifting charges usually fall under New York Penal Law section 155.25. An NYC shoplifting lawyer can help fight these charges.

New York Penal Law section 155.25 criminalizes the stealing of property valued at or under $1,000. The specific crime is called petit or petty larceny. This is the least serious theft offense in New York but still has substantial consequences. Most shoplifting charges fall under this dollar amount and statute. Petit larceny is a class A misdemeanor in New York.

What should I know if I have been charged for Shoplifting in New York City?

The other elements of petit larceny are:

Showing intent is an essential part of a petit larceny conviction. The intent to deprive is often demonstrated by evidence that the defendant took steps to withhold the property from the owner for an extended period of time or the defendant exercised control over the property for a similar duration. Refuting intent is a common defense against all theft charges, not just NYC shoplifting.

As a class A misdemeanor, the potential punishment for shoplifting property less than $1,000 is up to one year in jail and/or a criminal fine up to $1,000. Shoplifting property valued over $1,000 leads to harsher charges under New York Penal Law section 155.00.

Grand larceny is a felony offense that criminalizes wrongfully taking, obtaining, or withholding property valued over $1,000 with the intent to deprive the true owner of that property. The class of felony charged, and likewise the criminal punishment if convicted, depends on the value of property stolen.

In addition to the prison sentence, a felony shoplifting conviction can lead to substantial criminal fines. This fine can be up a specified amount depending on the class of felony charges or up to twice the amount shoplifted, whichever is greater. The severity of the prison sentence and potential criminal fine makes it important to engage a qualified shoplifting attorney in NYC such as Greco Neyland, PC.

The attorneys at Greco Neyland, PC are ready to work on your defense to shoplifting charges in New York. We have experience defending all types and severity of theft, including representation of individuals accused of multiple shoplifting offenses. Regardless of whether your shoplifting charges are petit or grand larceny, we can take the case.