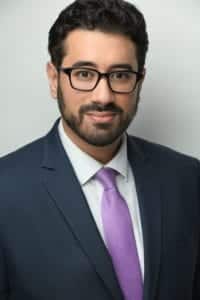 Mehdi earned his J.D. from New York Law School, where he took part in internships at the New York County District Attorney’s Office, the Queens County District Attorney’s Office, and the Kings County Criminal Court. During his law school training and his time in the Bronx County District Attorney’s Office, Mehdi was able to gain experience in a variety of criminal cases while learning the policies and procedures used in 3 out of 5 of the District Attorney’s Offices in New York City. Mehdi also graduated Magna Cum Laude from West Chester University of Pennsylvania with a Bachelor’s Degree and two minors, including a minor in Criminal Justice. Mehdi is dedicated to ensuring that clients are treated fairly and are not denied their rights. Mehdi is multi-lingual, and speaks French and Arabic, thus providing direct communication with the firm’s French and Arabic clients. As a Senior Member of the Greco Neyland team he works very hard to provide the best legal representation to their clients.  Mehdi happily provides personalized attention to each client, giving them the proverbial “red-carpet” treatment because he truly embraces the Greco Neyland mission, “Everyone deserves the best and most skilled defense that is possible.”